On a normal school morning, in the middle of getting ready for school before Thanksgiving break, Miss M asked me a question. One that felt heavy and weighed down time:  “Mom? Do you keep the Elf on the Shelf in your closet until tomorrow night? And then its just you and Match moving it at night after we go to bed?”

I knew we’d have this conversation before Middle School. I knew I would send her there with the truth. However,  I had thought I would have one more Christmas with her still naive about the actual logistics of childhood, holiday magic. I thought there would be Fourth Grade. Yet, her question was so specific and thought out that I knew this was an end and the beginning of whatever came next.

I answered the best I could fifteen minutes before the bell for school would ring:  “That is very good question. I have an answer for you, but because it is such a big question, it will have to wait until after school. Also, can you try not to ask that type of question in front of your sisters who are younger and haven’t thought to ask that yet?”

“I didn’t say either yes or no. It’s a bigger conversation than you probably think it is and I’d like to give it my full attention. Before school you don’t have my attention and we’re running late as it is. And babes, while I know this is on your mind, don’t bring it up at school today, okay? Note everyone is ready to ask the questions you’re asking.”

“Okay.” She paused and whispered, “But, Mom, *if* you are the one moving the Elf– what does that mean about Santa?”

“After school. I promise to answer you after school. It is bigger and more important than a five minute conversation.”

We finished getting ready and I sent her off to school with little knots in my stomach. Now, I have no idea if this bubble of doubt was from her peers– which I think is how most kids find out and a norm of public education. Or if she actually pieced it together herself based on the Elf’s handwriting like she said later that day. I called her Dad and let him know as a courtesy. We never got it with Blue Eyes and it stung. I did however text a few friends to commiserate and steel myself a little.

Some of them had been asked and put off the questions. Some of their kids already knew– a tooth fairy snafu. Some knew they were near the end of the well-intentioned story.  I had already decided I would tell her.  From the start, while I believe in magic and faith that this tradition creates, I had a really big moral issue with the deception of lying to my children and the surveillance aspect of the Elf on the Shelf. I honestly, was relieved to finally come clean with Miss M.

I picked her up from school and she kept nudging me on the way home. Impatient and wanting to know which is true to her feelings. I told her to wait until we were home and I got her younger siblings settled. In my head, I had always thought this conversation would involve going out for a tea and having a heart-to- heart in a cozy cafe with special one-on-one time. With Match at work and the holiday prep ahead of us, it was sitting together on her bed with the door closed. A long time ago, I had read up on this parental dilemma (https://www.pinterest.com/wanderingthroughlife/christmas-and-truths/).  I had decided what kind of conversation I wanted this to be.

“Well, darling, it is both. Are you sure you want to know?”

She asked for the truth. I told her this:

Santa is absolutely, one hundred percent real. He just is not a big guy in the red suit who lives in the North Pole. Santa is all the wonderful things that make the holidays feel special. He is kindness, hope, generosity, and joy that people have during the holiday season. Santa is everyone who loves you and makes the holiday season special. So, yes, Santa is real. He just isn’t one single person. The magic is that he is everyone who loves you. And, now that you know… You get to be Santa, too. You get to be magic keeper which is a very big, important responsibility. You get to help spread Christmas magic.

I honestly think this is the important truth about Santa Claus. That the magic is people coming together and being generous with their time, thoughts and efforts. He is not a trick or lie we tell children. More importantly, once they ask and get told, that they are now a part of the fold.

“Okay. I know you love your Elf on the Shelf. Those are new and not a thing we had when I was little. Keith and I do keep it in the closet and move it as night after you go to bed. I was not going to ever have an Elf because I think you should behave and be a good person because that’s what you have inside you. Not because some Elf is going to tattle to Santa. Your actions are a thing you need to control for yourself, not because of what other’s will think. So, this Mom is not a fan of Elf on the Shelf, but everyone has one and it was hard to tell you at four that i disagree with the philosophy of a really fun holiday game. Our Elf is okay though.”

“Dear girl, you can help move it. That Elf is a lot of work… unless you want to still find it in the morning? Just because you know now doesn’t mean you have to give up fun things.”

And now, a few weeks later, I can have real conversations about her Christmas list. She helps move the Elf most nights for her sisters. She makes fun of my hiding spots that are pretty lame some days. She gets to be a part of making things special and I think, in our house, that makes all the difference in the world. Most importantly, I kept her confidence and trust which is what I would have been more sad to see diminished. For us, Christmas is a different kind of special this year. We have an extra Santa in our midst.

I have been mulling over why this milestone feels like holding an actual stone when it arrives. The begrudging weight of this moment and why are  we are fiercely protective of it is probably just a mix of grief and fear. Nervous of how it would turn out, about how that level of trust between us would survive, coupled with the fact I had to let go of something no parent really wants to let go of. Another moment of grief in parenthood as you give up a piece of their littleness. Yet, I made room for something bigger. I traded one piece of childhood magic for another. All the things I did for her to experience the magic of Christmas are now becoming things she is doing for others. Christmas didn’t get smaller this year with the truth, but instead it grew here.  Now, my nine year old *is* herself a little Christmas magic as she embraced her new role in the family.

In the end, the truth, in my home is that Santa is absolutely real. He is my nine year old, leaning in, asking her little sister is she found the Elf this morning. He is in that look of utter joy when one small hand takes her and pulls her pointing excitedly to the hiding spot. The spot she already knew about because she picked it. Christmas magic is different this year here. It is bigger and joy-filled and not even the loss I was worried it would be.

Sometimes you just need to put it into words. Average mom. Homemaker. Lover of good food. Book worm. Maker of many beautiful mistakes. Here is where I come to write about the ups and downs of my little life. (And sometimes those words may be filled with grammatical errors and typos. Just as a forewarning. :) ) View all posts by Lori

2 thoughts on “Truth and Grace”

This site uses Akismet to reduce spam. Learn how your comment data is processed.

Some Things I Write About: 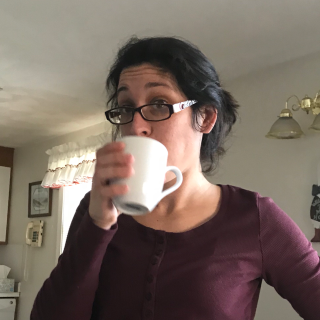 Sometimes you just need to put it into words. Average mom. Homemaker. Lover of good food. Book worm. Maker of many beautiful mistakes. Here is where I come to write about the ups and downs of my little life. (And sometimes those words may be filled with grammatical errors and typos. Just as a forewarning. :) )